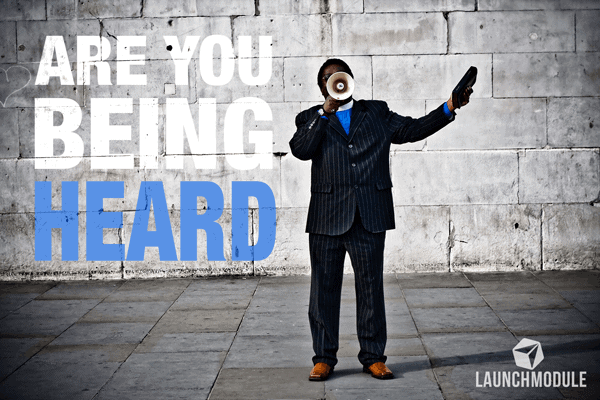 Twitter was founded March 21, 2006. I watched it pass by for almost 10 years before I picked it up. I never doubted it would be popular. I just wanted nothing to do with it.

Heartfelt 140-character obituaries. Check-ins at the coffee shop, the mall, the movies. It seemed the perfect narcissist’s tool. And, as a seasoned, Grade-A narcissist, I don’t need devices and applications to expand on that. Twitter has apparently lost $2 billion dollars in those 10 years. I’m not sure what that says about what we value. And how we value our time.

Finding your own voice in oceans of noise

There will be more apps. It will get easier to express yourself. Or, it will at least seem it’s getting easier. Imagine how Twitter looks to someone first trying it in 2016. After you’ve been using it 5 years or more. Imagine what this type of feed-frenzied activity looks like from the outside. Imagine going to a concert, and at the door everyone is issued a megaphone.

How will you communicate in that venue? There are a few ways. Be up on the stage and command the most attention. Or, if you’re in the audience, be louder, faster, and more outrageous. You won’t come close to the attention given to the stage (known as social proof) — but if you’re really loud, really frequent, and really a buzzing hornet, you’ll be noticed.

Another way, which is probably the most common, is to simply communicate with some frequency with a smaller and tighter knit group. Share things you heard from others. Give your own opinions sometimes. Try to pitch a sale. Repeat the sayings of others that you like. But what about your own, personal, most unique self and voice? Is it possible to be an individual in a swarming crowd? Can we all be unique? Or can there only be a few. Or maybe only one.

I think of the scene in The Doors movie where Jim Morrison jumps down into the crowd, leading a trail of reveling dancers, snakelike, through the vast concert hall. And Jim being led, incidentally, toward his death by an unseen Indian shaman. But Rock is Dead, as Jim presciently said in 1969. The microphone has no more cord. It’s everyone’s turn to speak, or to sing, or to dance madly in the night. Everyone is the center of their own show now. This is democratic communication. It is a nightmare. And it’s only going to get worse.

The Prophet of Park Avenue

I remember working soulless night shifts in investment banks back in the go-go 90s. There was always this guy on one of the medians. Maybe 47th Street and Park Avenue. Repent. The Time is Now. Red light. Green light. Shuffle across the street. Yellow cab. Black limo. Coffee cart. Eat. Repent. Repent. Bible held high. Cardboard sign. Repent Ye Sinners. The Time is Come. The man may still be there. He was dedicated. In the middle of four directions of constant traffic, every day, he stood fast. He had one message. And he delivered it relentlessly.

This is what I am told I must do by social media experts. Say my thing. Over. And over. And over again. Schedule it. Repeat it. Blog. LinkedIn. Medium. Twitter. Facebook. Instagram. Anchor. Periscope. YouTube. I used to put an ad out on Craigslist. Maybe buy some Google ads. I made a living. That method worked 7 solid years for me. I’ve had over 350 Clients. Some nice deals. Lots of small, very difficult deals. But I scratched through. Now. I have to talk about what I do. Several times a day. I have to give value. Give more value. Don’t ask to make a sale until I’ve given tons of value. OK then.

So, who is financing this for me? I don’t have a line of credit. I am project to project. I get a VA Disability check monthly that really helps out. Even my mom is good for an (awkward) touch now and again. Running this show is a grind. But I am willing to learn. So tell me Twitter experts. Your platform has lost Two Billion Dollars in 10 years. And Facebook. All I hear is that organic reach there has died on the vine. So what’s up? I recognize that people are going to social over Web. I see it in our traffic downturn. We’re squared away on mobile. That’s not the issue.

If everyone is publishing, who has time to read?

If everyone is speaking, who has time to listen? And the answer is, to do even more? To add even more ‘content’? More content cannot be the answer forever. This is going to reach a tipping point. All systems do. Starbucks and Wal-Mart are closing stores. It has stopped snowing in Canada. Leo DiCaprio is pretty freaked out about the environment but I’m not sure he’s moved into a tiny house or Airstream trailer just yet.

Breadcrumbs on the trail

Politics is a circus. All we need is a good loaf of bread. Everything is always tipping. More content. Is that what you’re being told? Produce more? The Park Avenue Prophet had one message on his cardboard sign. But he had a Bible too. So he had a lot to draw from. And he delivered his scriptures beautifully, artfully, and with high drama. But he never targeted anyone. He just put it out there. In fact, the delivery was the same whether the streets were crowded or empty. Perhaps it isn’t about who is listening or watching. Perhaps the whole point is in your own experience of sharing your message. If that seems a little mad. A little crazy. Talking to no one in particular. Maybe it is. Or maybe it’s just breadcrumbs. And so publish. Explore. Get lost sometimes. Maybe someone else will find your breadcrumbs. And it will help them. But certainly, let’s not cover the forest floor entire with breadcrumbs. At that point, the signal, the message, the trail is lost, no?

✍ Erik Johnson is the founder and director of Launch Module Media based in Greater New York City.